Thank You, CM Punk. Please Feel Free To Do Whatever The Fuck You Want

The other day, the esteemed David D. penned a piece entitled “Good Riddance CM Punk. We Don’t Need You Anymore” for Uproxx. Now, looking at that title, it may shock some of you to learn that David is not a spurned ex-lover of Punk’s, nor is he a toddler who has smashed a little plastic table with his Punk action figure for the last time. He is simply some dude – presumably, a grown man, not a 15-year-old with internet privileges – who is really, really, really, really pissed that CM Punk left WWE months ago without saying goodbye to all of us. And, to put it mildly, he wants him to burn for it.

Imagine you’re a fan of someone. A rapper, an actor, an athlete. Hell, your favorite postman counts. Now imagine that person just quit. Just stopped what he or she did for a living out of the blue. Then that person never told fans why. Then, you’d see this person out in public: sporting events, interviews and never acknowledges leaving the fans or the fact that these fans even exist.

I don’t know about you, but I’m not cheering him anymore.

So we know immediately that he’s upset because Punk left the company. That’s totally understandable because we all were. We were disappointed, sad, totally in denial, even really fucking angry for a while. It was hard to imagine the WWE landscape without Punk, and damn it, we didn’t want to, either. But it’s been months at this stage and, although we’re still chanting for him, wearing his shirts and brandishing signs for him, we’ve moved on. To suggest that he owes us something after years of service, during which he put his health on the line night after night after night, and that we should stop supporting him because he’s

somehow done us wrong by not explaining the intricacies of his decision-making process, is ludicrous and downright laughable. In fact, since Punk bowed out of WWE, most of us have realised that he is much happier this way, that he made a choice that benefited himself, his friends, his fiancee (fellow wrestler AJ Lee) – a difficult decision that he made to better his life and to which he is entitled as a human being. Why, then, do the people who claim to love him so much have such a massive problem with that? A recent article by one of Punk’s best friends, the great Natalie Slater, drove the point home that, not only is Punk totally isolated these days, but that certain, so-called fans really aren’t happy about it. Slater notes that:

On what planet is it okay for anyone to behave this way? To stalk and bother and abuse our so-called idols relentlessly, to the point that they don’t even feel comfortable taking out the goddamn bins? David, who bought a Wrestlemania ticket on the misguided assumption that Punk was going to show up at that event and shock us all into submission, seems to be of the opinion that Punk got what was coming to him, and that he’s come out of this worse because he could’ve had the great match with Triple H that Daniel Bryan had, that he threw this chance away and is now being laughed at because of it.

He still managed to get buried by HHH. See, as much as we may hate Hunter for his backstage politics or how he’s self-absorbed, no one can deny that the man is a competitor, obsessed with being considered one of the best ever. So he responded to Punk’s direct refusal to work with him by getting in the best shape of his life and putting on a classic match with Daniel Bryan. In one 30-minute match, he proved that he could’ve had a great match with Punk and would have lost to him in the middle of the ring

Not only does this reek of ignorance and desperation, as David tries to simultaneously understand the reasons behind Punk’s departure, while also giving a middle finger to him for being dumb enough to not see the bigger picture, he thinks he knows the reason why Punk left – we can only assume that he has some serious sources at WWE, aside from a raging boner for Trips – and that it was the wrong one. We don’t know, we probably

never will, and it is not up to us to decide whether Punk was right or not. David goes on to explain that, possibly unbeknownst to Punk, he actually isn’t “bigger than wrestling” – even though there’s no evidence to suggest he thinks such a thing – while also getting incredibly butthurt over the fact that the poor guy had the audacity to go to a ball game here and there or showed up on TV, or at a charity event. FUCK HIM, right? How dare he rub it in our faces that he left us!? We don’t miss him one little bit! If David really doesn’t care about Punk and just wants him to go away, why is he so hurt that he hasn’t acknowledged his fans? Why does he care what he’s up to at all?

He has yet to acknowledge the fans he turned his back on. And that’s really who he’s wronged here. I get that the WWE can be a frustrating place. That the wrong talent gets pushed sometimes and talent gets burned out. I understand Punk needing time off. And he’s definitely sticking it to the WWE brass like we’ve wished an athlete would. However, he’s sticking it to his fans worse.

Again, there’s this idea that Punk has somehow wronged us all, even though David totally understands why he left because the WWE are horrible but yet also still worth staying with for the sake of the fans, who he clearly doesn’t care about. But, how exactly has Punk wronged us? How is he sticking it to us? He got to the top of his game in a relatively short period of time, after working his ass off to get there, achieved everything he hoped to in his career, worked with some 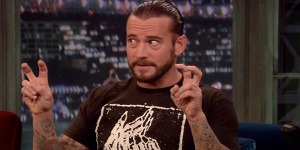 of the greats, established himself as a fan favourite as both a heel and a face, and retired when he felt the time was right. Punk did the job he was hired to do. He was exceptional in his field and he deserved all of the success to which he was afforded. He left without saying a word because, much like his hero Stone Cold (whom David makes passing reference to, but interestingly doesn’t criticise for leaving) Punk never felt the need to explain himself to anyone but those close to him. He doesn’t owe us anything because he’s already given us everything, and now is his time to rest and recuperate and to live the life for which he’s worked so hard.

I really don’t give a damn if Punk ever comes back. He turned his back on us. And he’s quite frankly being an a$$hole about it. As a wrestling fan, it’s time to close the book on CM Punk. Good riddance.

This last paragraph is the least convincing because if David truly didn’t give a damn about Punk – if, indeed he was a true wrestling fan, as he hopes to convince us – he wouldn’t have written this piece, which desperately tries to tear him apart and lick his butt in equal, yet totally opposing, measures. Frankly, David is a man who should know better, who has let his own selfishness cloud his judgement of a person whom he doesn’t know personally, someone who does not owe him anything and who has done nothing to attack or

hurt him. It’s sad, but this is the general feeling from a lot of ex-Punk fans, who believe they are entitled to more from a man they don’t know and whose life has nothing to do with theirs. Slater highlights in her piece how hurtful it is to see her friend unable to live his life in peace because of the intrusion of those who claim to idolise him so much, and she asks that we all try to take a step back and understand how difficult it must be for him on a daily basis.

I can’t imagine finally being able to do anything I wanted to, financially, but not being able to do any of it in peace. Being on a flight to some far-off land and not being excited about it because there’s nowhere to hide on an airplane and everyone is staring at me. Think about my friend the next time you buy anti-diarrheal medicine at Walgreens and no one tweets about it. I do.

As far as I’m concerned, Punk can do whatever the hell he wants. He forged an incredible career, which we can all enjoy for the rest of our lives without feeling the need to punish him for his decisions, and he’s worked tirelessly to get where he is. To my knowledge, he hasn’t stolen, cheated, or wronged anyone in the process, least of all his fans who should support him no matter what, instead of questioning everything he does. He gave us his best, and now he needs us to give ours by leaving him

alone. After reading self-entitled, bratty nonsense like David’s, I kind of hope Punk never comes back, because it’s better to leave complete dicks like him wanting than to give them the satisfaction of an answer, which they can then tear apart forever. Guys like that won’t be happy until Punk dies in the ring. For those of us who genuinely love Punk, who see him as a hero, an inspiration, a legend, all we can hope for is that he finds happiness and that all of this craziness eventually dies down. He deserves to live a good life, just like everybody else, and he is entitled to his privacy, too.

He does not owe us an explanation. He doesn’t owe us anything. He has given us all he’s got and it’s time to accept that and move on.

If people continue to go through his bins and tweet about him being mean to them, then it won’t be too long before he disappears from view completely. And this time, he definitely won’t be coming back.

13 thoughts on “Thank You, CM Punk. Please Feel Free To Do Whatever The Fuck You Want”