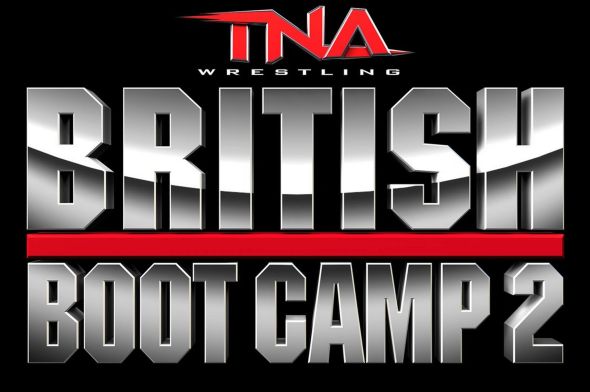 First and foremost I’d like to say that, since Dixie’s announcement regarding the 6-man tag match and subsequent matches for the successful 3, TNA have done a helluva good job in dragging out two episodes in which not a whole lot actually happened. That said, I guess any opportunity to see our homegrown stars on the big screen and, therefore, to increase exposure, can only be a good thing for the UK wrestling scene.

This week’s show opens with the six finalists building the TNA ring, with Kay Lee Ray featuring prominently, stating how she’s fully accustomed to the nuts and bolts reality of this side of the business. There was some mention about the six-sided ring used in TNA, which is so different to any other promotion, indy or otherwise. 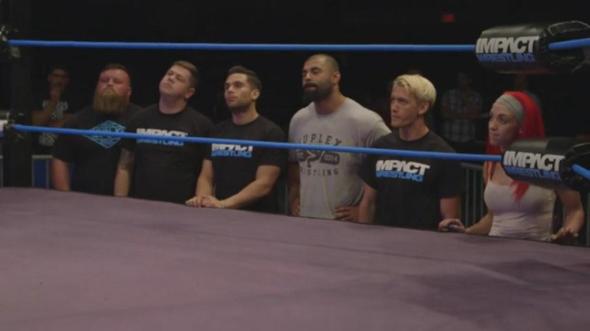 There was also plenty of talk, throughout the show, of the ropes with Al Snow giving specific information as to the composition of (not sure if he has shares in the company who manufacture them, but he seemed to give it his best pitch). It would be interesting however, to see how the finalists could adjust to this six-sided behemoth.

For me, the opening segments of the show (before the in-ring work) were primarily to build to the 6-man tag match which will feature on next week’s show, the penultimate episode of the series. Mastiff, Rampage and Andrews all had (probably legitimate) gripes with Grado’s work rate. Rampage Brown, in particular, had several derogatory things to say about him, at one point calling him a buffoon, a slug in a singlet and saying his only role was as a joker.

Mastiff, as has become his custom, also took to “friendly banter” with Grado. I found the shower section absolutely hilarious, Grado saying his new iMPACT! t-shirt smelled of other peoples “pish” and that it was, “the worst ever” It had me in stitches, and I certainly found myself responding to Grado more than any other participant during these moments. Due to the way it has been built, I definitely see Mastiff and Rampage teaming up against Grado and Noam Dar, with Andrews and Kay Lee Ray with either team to complete the 6 person tag match.

EC3 introduced himself to the finalists and this is when I became almost certain that Grado has already secured a contract with TNA, whether as the winner of Boot Camp or otherwise. EC3 called Grado a “Scottish piece of Haggis”, which must be one of the worst insults ever hurled during a promo – not original, not creative and I don’t know how everyone kept a straight face during it, truth be told. But it all signals a work with Grado. In last week’s review I detailed my predictions for the EC3 and Grado storyline and it would appear this is the way we are heading – an excellent introduction for a new star, which still provides focus and direction for one attempting to establish himself fully.

Magnus, Austin Aries and DJ Z were drafted in to assist with the in-ring work out. Mark Andrews was up first, against Aries, and he really struggled to display his true abilities: it was clear that the occasion, the six-sided ring, rope-stiffness, etc., got into his head and affected his performance. He looked quite slow and heavy footed –which is uncharacteristic for Mandrews, who as previously mentioned, is generally a high flyer. Both Aries and Snow commented afterwards, with Aries being far from complimentary in his post-match interview, saying Andrews was tentative and lacked conviction. I’ve had Mark Andrews down as a favourite throughout and have seen him wrestle live so this was disappointing, though I’m sure he’ll bounce back next week.

Noam Dar was next and faced off against DJ Z. He looked good and that’s despite not really being able to take the ropes properly and almost giving himself whiplash on more than one occasion. He was assured, composed and skilled and we even got a glimpse of his Liam Gallagher-esque pose (hands behind back, slight lean forward) indicating he was comfortable enough to perform true, something Andrews struggled with. Noam gained the plaudits, with Magnus stating he had “excellent ring skills” and Snow, Aries and Zema all seemingly impressed too. I was incredibly pleased for Noam, to have the first British TNA World Heavyweight Champion be so complimentary about his work is huge for him. I would love to see Noam Dar on my TV every week.

Kay Lee Ray was our third competitor and again faced off against DJ Z. She looked visibly nervous beforehand but this was left outside the ropes, the highlight being when she hit Zema with a wonderfully executed hurricanrana off the top ropes in a performance she should be absolutely delighted with. The only slight negative coming from Aries and Magnus, was when the latter commented, “pretty is good, functional and pretty is better” on her failing to attempt a pin after the hurricanrana. It’s another testament to the talent on offer in the UK when I say this almost put her into my top three – almost.

I really don’t want to turn this into an agenda against any one particular wrestler on the show, but I really struggle with Mastiff when I have to listen to him speak. His incessant bitching and whining in the last two weeks continued on Sunday, with him whining that he was sick of having to prove his conditioning and footwork again.

Granted, Aries honed in on it straight away but this is the chance of a lifetime and these are all vital components of a pro-wrestler, if you want it that bad (which I personally doubt he does), man up and do it, minus the bitching – prove it over and over and over again if you have to and when victory comes, it will taste much sweeter and you can stick it down everyone’s throats for good measure. It sounds strange, because Mastiff did exactly what I said he should last week – he moaned, but he was physical, assertive and passed Aries’ stamina test with flying colours. But, when I got thinking about it, people love to hate a bad guy, a whiny, bitchy heel who wants everything his own way and picks on the little guy – and when I began picturing Mastiff, in TNA, doing exactly that, and it worked.

Rampage Brown responded with a poor week last week by doing exactly what he does best, in his work out against Magnus. Rampage looked awesome: strong, quick, physical and absolutely ferocious in the ring, at times seemingly tossing Magnus around like a rag doll (a guy who is 6″3′ and 240 pounds!). During the segment Magnus commented on Rampage’s physicality, too. Personally, I think the Real World episodes do Rampage no favours, but where it matters, in the ring, he shows why he has to be considered a favourite with a classic Rampage Brown outing.

Grado was put in the ring against his buddy Noam Dar but there was little wrestling on show. That’s not a comment on Grado’s ability – although Al Snow obviously has his opinions, asking “Grado, why don’t you come in the ring and dazzle us with your wrestling brilliance” – it’s just that EC3 interrupted before anything of worth could be done, goading Grado and teasing him as he entered the ring. Grado lost it, which was reminiscent of Al Snow in the first episode, offering EC3 into the ring and calling him Ethan the Dafty.

Again, it all feels like a work designed to introduce Grado into TNA: over the top reaction, EC3 building up their match and rivalry and even Noam Dar’s interview seemed to exclusively serve this very purpose. Tellingly, Grado even apologised for “disrespecting this ring”, something which, I feel, will form the basis of his very first feud in TNA.

Currently, I make it Grado, Noam Dar and Rampage Brown to make the final three. However don’t be too surprised if Kay Lee Ray makes it in, as she would fit perfectly into the Knockouts division.