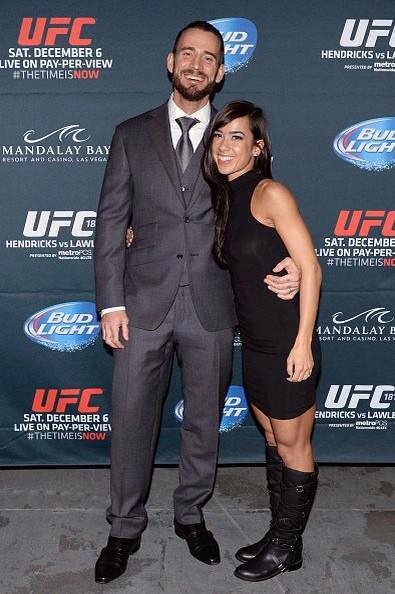 After sending the internet into a total meltdown just last week, ex-WWE employee CM Punk has gone and done it again with the shocking (but not totally unfathomable) announcement that he has been signed to UFC, and is due to take his first steps into the Octagon next year.

The company revealed they’d signed Punk during their UFC 181 PPV broadcast last night, with a Tweet, featuring a Vine of the man himself, on their official account that has since garnered thousands of favourites and retweets.

UFC president Dana White confirmed Punk, who has never professionally fought MMA before, intends to fight at middleweight (185 pounds) but would be open to 170 pounds, also. Punk noted during a press conference that he’s currently testing his body to see how far he can push it, steadily losing weight and gaining muscle mass, but 185 is definitely the goal for him.

Although Punk’s background is professional wrestling, he’s been training in MMA and jiu jitsu for quite some time now, and has been spotted regularly attending shows. He’s also a long-term, very vocal, fan of UFC and counts several employees as good friends.

He wanted to fight here. He wanted to give it a shot, so we gave him an opportunity. It’s not like Brock Lesnar. We’re not going to throw the kitchen sink at him – White, speaking to ESPN

He may be the most famous example of a wrestler-turned-MMA-fighter but Lesnar isn’t the only other WWE star to have taken their chances in the Octagon, with Batista infamously giving up after losing just one match, noting to this day that he figured it wasn’t worth his time after that.

However, Punk was quick to note, during the press conference, neither party had to “beg” for this opportunity, and that he’s wanted to take a shot in UFC for a very long time. Especially at his age, he advised he would’ve “been a fool” to say no at this stage.

This is my new career, 100 percent… and it’s going to be fun. My professional wrestling days are over… This is something I’ve wanted to do for a long time. I felt like it was now or never. I have a limited window most fighters don’t have. I’m either here to win or get my ass kicked – from Punk’s statement on his signing

All things considered, it’s an interesting choice for the controversial star, who noted in his already-infamous interview with long-time friend Colt Cabana that he always keeps his cards close to his chest, never wanting to be the guy who teases something special is about to happen, only for it to fall through at the last second and leave him looking foolish as a result.

Punk mentioned a no-compete clause, specifically targeted at UFC, during his chat with Cabana, but when pressed on it during the press conference last night, he revealed that it’d all been sorted out on his birthday, at the end of October, and he knew he was free to compete but just couldn’t really discuss it at the time.

Shortly after the signing was made public, the WWE reportedly deleted Punk’s Facebook page, and, when asked if he’d discussed it with any of the current roster, he confirmed he’d only really spoken about it with his wife thus far – even though his phone had “blown up” in the aftermath.

The reaction has been positive, for the most part, with AJ Lee herself tweeting that she was “the proudest wife in the world”, and current UFC women’s champion Ronda Rousey tweeting she “couldn’t wait” for Punk to get started. However, several UFC fighters volunteered to be his first opponent, and Nate Diaz replied to the announcement tweet with the single question “why?”

Paul Heyman retweeted comments from fans but didn’t add to the discussion himself, while Rey Mysterio commented it was “awesome” to see his “homie” signing with UFC, and the legendary Jim Ross noted it would sell PPVs without question – although, he also advised Punk is probably going to have a rough time because he’s a rookie and his colleagues will want some of the dough he’s sure to bring in.

Regardless of whether you personally agree with his decision, it’s pretty obvious Punk doesn’t need to work ever again if he doesn’t want to, so this is clearly a decision that makes him very happy, and one he’s taken his time with, also.

Here’s hoping he does incredibly well and shuts up everyone who’s still screaming that wrestling is fake, twenty fucking years later. Punk’s debut date hasn’t been set yet, but suffice to say he’s probably going to break the internet yet again whenever he does step into the Octagon.