This year has been great for pro-wrestling, but there were certain moments that really stood out for me, as a fan. Here are my ten favourites:

The year closed with the announcement that Jeff Jarrett and his GFW promotion would be streaming the NJPW Wrestle Kingdom 9 show Via Flipps worldwide. The much talked about promotion is aiming to deliver a worldwide roster of wrestlers competing over several companies. The talent already involved is outstanding and, with Jim Ross and Matt Striker providing UK commentary, this will hopefully entice a whole new audience to try some wrestling outside of WWE and TNA.

Brock Lesnar completely manhandled Cena at this years Summerslam, delivering viscous Suplex after Suplex in a thrilling match that was a rarity for WWE in 2014, as it detailed the complete destruction of company hero John Cena. Not a technical match by any means, rather it was a brutal, yet engaging slugfest that ended with the decimation of Cena, the likes of which the WWE Universe had never seen before (and we ate it right up).

8. Kushida Vs Ricochet: NJPW Best of the Super Juniors Final

This years BOSJ tournament was outstanding, topped off by this exciting match starring two, top young talents in wrestling today. Ricochet, in particular, has had an astounding year, wrestling all over the world from the top UK promotion Rev Pro to making a name for himself in NJPW. This match was the perfect way to crown the new super junior winner, and both men deserved the title.

NJPW has had a solid year overall, boasting some of the highlight matches of the past twelve months. Ex-TNA Superstar AJ Styles took the spot of NJPW, and now NXT, mega star Prince Devitt and joined Bullet Club. He beat Kuzuchika Okada at the NJPW Pro Wrestling Dontaku PPV in an excellent match.

6. Seth Rollins turns on The Shield

In a genuinely shocking moment,right when The Shield were looking to take the WWE by storm, golden boy Seth Rollins turned on his brothers, leaving the usually unflappable Ambrose and Reigns in disbelief. The fact that since the disbandment Ambrose and Rollins, in particular, have been shining in the company is great, and the future is clearly bright for all three once the dust settled on this excellent turn.

The WWE Network launched earlier this year as a 24/7 streaming service, chock full of archive footage, with live PPV streaming and original programming. It was a wonderful idea and features one of the best weekly episodic products (NXT) in a prominent position. Sadly, UK fans have been left short due to complicated issues with SKY television and although the Network was due to launch late in the year this was put back until the New Year. By all accounts, though, the service was revolutionary for the industry and it was quickly followed by NJPW World in early November, thereby further exemplifying the hold WWE has over the pro-wrestling world. 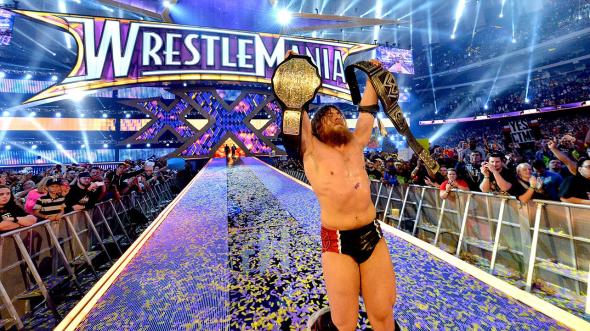 Such an awesome moment in wrestling this year, as we finally got to watch Daniel Bryan win the championship in a high-stakes, hugely memorable triple threat match on the greatest stage of them all. The fact that everyone had Bryan pegged as not being good enough to be the face of the company was absolutely shattered when the Yes Movement created one of the most memorable Wrestlemania moments of all time. 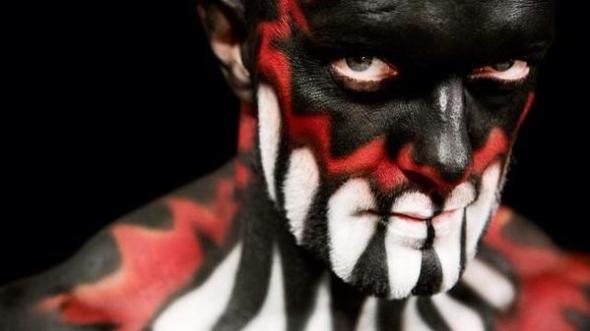 NXT has had a brilliant year, with excellent in ring action and three huge signings. Prince Devitt was long rumoured to be signing to the WWE, and when the news finally hit fans went understandably crazy. Adopting the ring name Finn Balor, Devitt has made major waves in the ranks of NXT, alongside Japanese Legend KENTA (Hideo Itami) and former ROH champ Kevin Steen (Kevin Owens).

The NXT roster went out and proved that they are the future of the WWE every single week this year, and their PPV was no different. Every single match on [R]Evolution was fantastic, from the highly-anticipated debut of Kevin Steen (Owens) against CJ Parker in a short, bloody and brutal opener, to Charlotte Flair and Sasha Banks showing the WWE (Total) Divas how it’s done in an excellent Divas championship match, but topping it all off the match of the year by a long stretch was Sami Zayn vs Adrian Neville in an emotionally charged and innovative match that had fans on the edge of their seats throughout. Fantastic stuff from two future WWE champs, with a sting in its tail that nobody could’ve predicted in the shape of Owens’ brilliantly unexpected heel turn.

1. The Streak Ends At Wrestlemania 30 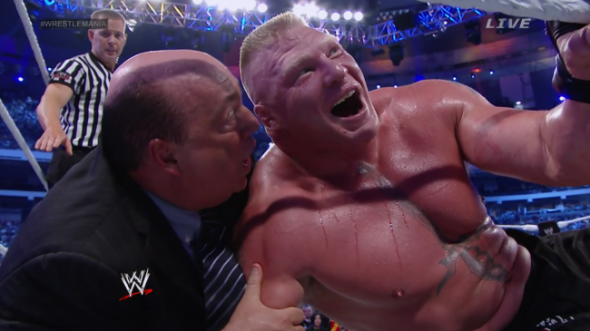 The Undertaker‘s legendary streak was shattered at the hands of Brock Lesnar on the grandest stage of them all this year, leaving fans shocked and devastated in its wake. The hard-fought match, in which a noticeably groggy ‘Taker battled the powerhouse Lesnar, was one of the most shocking and original moments of the year. Fans were unsure and awestruck as events unfolded but it was captivating stuff from start to finish and will live forever in our memories.

Honourable mentions:
Mentions must go to the EL Rey Network for the entertaining Lucha Underground series, Dolph Ziggler and his outstanding year of hard work and, in particular, his brilliant match at TLC(&S), Bad News Barrett and Mizdow, my favourite wrestler in NJPW, Shinsuke Nakamura, and to CM Punk for staying true to what he believes in and pursuing his goals.