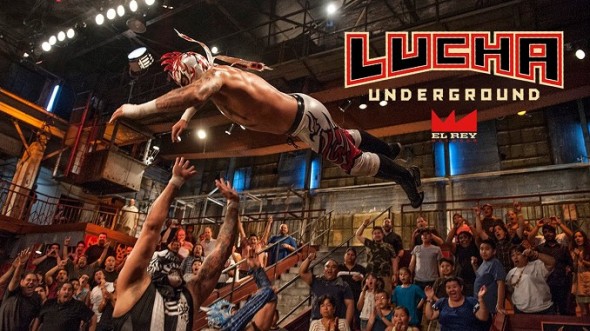 Last week, we watched the Lucha Underground champion fall victim to the beast that is Cage, leaving the fans in serious anticipation to see the conclusion to this devastating encounter, and opening the door for more Lucha madness this episode.

The odd duo of Pimpinella and Mascarita is set to face off against The Crew, kicking off this episode of LU in style. These two teams couldn’t be further apart in the spectrum of an impressively varied roster. The exotico legend that is Pimpinella uses his flamboyancy to get into the head of his opponents and, couple this with the speed of the mini-Lucha Mascarita, they gel surprisingly well as a tag team.

The boss of the Crew, Big Ryck, is sitting in the rafters watching intently as Cortez and Cisco decimate their foes, smoking his trademark cigar. However, his mannerisms seem a little off – something is clearly plaguing the mind of Ryck.

Pimpi valiantly fights back and gets the hot tag after catching Cisco with a top rope butt bump. Mascarita uses his speed to take the upper hand but quickly falls short at the hands of The Crew with a Mafia kick that damn near takes his head clean off.

The action sways back and forth with Pimpinella‘s offbeat and unusual move-set pleasing the temple fans, but things are wrapped up when The Crew get a blind tag and end things with a 3D Codebreaker hybrid manoeuvre.

Big Ryck takes to the ring to consult with The Crew, handing his cigar to Cisco. Clearly angry, he proclaims to be after the gold and that anyone who steps in his way will be dealt with accordingly, forcing the emphasis on the crew members.

The Crew take exception to this statement, the three remaining members assaulting Ryck, and dishing out a serious beat-down. Things escalate quickly as Ryck gets choked and ambushed with a Kendo stick. The brutality doesn’t end there as, in an effective spot, Cisco stubs the cigar out in Big Ryck‘s eye!

As medical staff scramble to the ring to aid Ryck, The Crew‘s actions are partly explained in a backstage segment with Lucha Underground kingpin Dario Cuerto, who hands out bails of cash for the “work” they just did for him.

Then, in a pre-recorded segment that is sadly weakened by Vampiro, he attempts to interview Cage and find out the motives of his attack. Vampiro hams it up for the camera, looking directly into it several times, which becomes a bit jarring.

This interview could’ve pushed Cage into the stratosphere, just going to show that LU needs to hire another announcer to handle these kinds of segments. Parts of it seem as though Vampiro is more involved with getting himself over than pushing Cage – having Cage attack Vampiro would’ve added a little more tension to the segment or alternatively having Puma address the situation face to face could’ve worked either.

Instead, it just fizzles out, offering nothing the fans weren’t already aware of among the constant plugs for the El Rey Network.

In what is sure to be a fast-paced and high-flying bout, Super Fly is up against the wonderful heel that is Pentagon Jr. The match begins with the two Luchadors trading super-kicks, each one landing perfectly, before Fly gives Pentagon the bump, creating a little bit of space for the announcers to call the action – fans will start to notice spots like this and how the wrestlers use counter holds to create space on the outskirts of the ring. This allows a bit more room for timing of spots, as this particular exchange ends with Pentagon Jr catching Super Fly with knees to the back.

Fly eats another superkick as Pentagon shows his dominance in the ring, subsequently running the ropes, before his opponent drops under, running back into Pentagon as both men collide in a double clothesline.

Super Fly gets some momentum from a springboard arm drag, as the Luchadors tries to rile the crowd behind him and he once again runs the ropes to springboard moonsault over them, taking out Pentagon in the process – an impressive feat, to say the least.

Fly tries again to springboard but this time he is thwarted mid-air by a vicious dropkick, showing the experience gives Pentagon Jr the advantage as he quickly goes for the cover, getting a close two count.

Pentagon swiftly follows up his momentum with a variation of Tanahashi’s Swing Blade, again forcing a two count.

Excellent ring work on show from both Luchadors allows a lot to go on in a small amount of time. The beauty of this is that it never feels claustrophobic, the spots are well worked out, while the fluidity of the fighters added great depth to their encounter.

Pentagon Jr takes to the microphone following the match and addresses Chavo Guerrero Jnr., thereby adding another enemy to the long list he’s accumulating at the Temple.

Sexy Star is one of the toughest wrestlers on the current roster. This spirited and feisty super-heroine holds her own in the Lucha Temple, as El Mariachi Loco kicks the proceedings off by blowing her a kiss – not a wise move to make in the ring with this particular lady.

Star locks up Loco, who gyrates during the lock, only adding to the mockery of the female Luchadors. She thanks Loco with a beautiful tilt-O-Whirl head scissors and some stiff kicks to the head.

Loco pulls Star’s hair and lands a Ric Flair chop on the chest of Star. She offers some retribution with a modified cross-body clothesline from the top rope.

The Hunter King Cuerno is an impressive Lucha, and his battles with Drago have been outstanding thus far. The daredevil feats of Drago, combined with his speed, make him a worthy adversary of Cuerno and their feud is fast becoming one of the highlights of LU.

Drago is audibly over with the crowd and once again speed-starts this bout by running the ropes and landing a dropkick to the chest of the kneeling Cuerno.

The only way to gain a victory in this match is by forcing your opponent to a ten count when he is downed, it’s no holds barred and there is no disqualification.

Drago hits a rope hook DDT, forcing the referee to start the ten count, but the Hunter escapes the ring at six to take a breather. The Hunter’s experience catches Drago as he runs off the apron for an aerial attack, allowing King Cuerno to land a sit-down Bubba Bomb.

Cuerno sets his sights on his target, landing two Suplexes before getting the switch over into a Brain-Buster, downing Drago. He then pushes the ref in between the attack, as Drago graciously stops before the collision, running back off the ropes and using the ref as a stepping stone for a hurricanrana.

Another ‘rana over the ropes is a tad sloppy, but due to the arch of the attack it’s swiftly saved by Cuerno, who refuses to allow any attention to dwell on the blunder.

The Hunter takes aim with the Arrow From Hell, landing a huge suicide dive through the middle rope to take out Drago, leaving both men flat out.

Cuerno sets up a table at ringside, even though it didn’t go to plan last week, as Drago tries to fight back against the more experienced Cuerno, who controls the match, driving his opponent’s head into the ring post four times.

Drago is then methodically placed on the table as Cuerno sets up to sacrifice him, pointing to the top ropes, much to the fans delight, as once again Drago plays possum and Cuerno’s table survives.

However, it doesn’t last much longer as, in an impressive feat, The Hunter hits the already devastating Thrill Of The Hunt through the table, adding to the impact tenfold.

King Cuerno only manages to keep Drago down to an 8-count, the closest thus far in the match but not enough to stop the determination of the underdog.

The Hunter is clearly getting frustrated, resorting to tying Drago to the corner post with climbing rope – this is completely legal in this match although highly unethical – as some kicks to the back of the head follow, with Cuerno choking the downed Luchador as the referee starts the count.

Another solid episode, with some of the impact taken away from Cage during his interview, which sadly brought the energy of the show down just a tad, an excellent mid card match from Sexy Star and Pentagon Jr, who continues to stand out in the roster.

The best thing about the LU are the story-lines, which are now starting to develop and the way they are constructed, over a short slot, is great as it keeps the fans attentive and interested in the numerous feuds without overloading them.

Lucha Underground is broadcast on Wednesdays on the El Rey Network