This week’s foray into the Lucha Temple kicks off with a stylised promo, highlighting last week’s attack on Big Ryck at the hands of his own Crew via boss Dario Cuerto. As you no doubt recall, this culminated in the Crew stubbing a cigar out on Ryck’s eye.

The show continues with Cuerto talking to the powerhouse Cage about the impact he has made thus far, taking out three luchas in a fatal four-way before decimating the champion Prince Puma in the centre of the ring in a hugely impressive display of power.

Dario is suitably impressed and no doubt wants to get Cage on the books ASAP, so to speak, announcing he will be granted a shot at the title in tonight’s Main Event match.

Mil Muertes strikes an imposing figure. This luchador is stacked yet agile and, coupled with the dangerous and controlling valet Catrina, he is a formidable opponent for Fenix.

The match starts at a furious pace, with Fenix perhaps unwisely trying to match his opponent in a display of power – he would be more suited to use his speed to take the advantage, as Muertes hardly flinches after several strikes and quickly downs him.

Fenix is undeterred, however, relentlessly pursuing Muertres, and is met each time with a devastating attack – one particular Suplex sees him tossed into the turn-buckle like a small child.

Muertes takes control of the match, thwarting Fenix at every opportunity, catching a 619 whip variant and knocking the win outta him with a huge dagger in the heart, yet Fenix still manages to find the strength kick out.

Muertes then uncharacteristically goes to the top rope and, as his attack comes down, Fenix manages to reverse and catch his opponent in a roll up, stealing the victory.

Next up, another promo airs for Cage – Lucha Underground are really pushing this guy hard and, although his in-ring ability is technically sound, the push is coming a little too thick and fast for my liking. Personally, I would’ve liked to see him build up a series of wins as, yes this way gets him over quicker, but pushing him this way could be detrimental to the other talents on the roster in the short term, especially Puma.

That being said, this pre-recorded promo is bad ass, showing a bunch of thugs assaulting Cage by smashing a bottle over his head to no avail as he systematically destroys each of them. These promos offer something fresh and innovative, and they fit well with the El Rey network and its programming, too.

Three high-flyers take on the hard-hitting stylings of The Crew in this traditional lucha 6-man tag – these kinds of matches are much more common in Japan and Mexico, in particular, as they allow for fast paced and exciting bouts.

Super Fly and Cortez The Killer start things off with Fly setting the early pace, handstand flipping out of an attack and quickly forcing Castro to leave the ring after a devastating hurricanrana.

Smart move from The Crew, forcing both Fly and the pace to slow. He doesn’t settle for that, though, and a backwards moonsault takes out two of the crew members, getting a close two count on Cortez.

He and Super Fly exchange a beautiful rope running sequence, which culminates in a springboard arm drag from the ropes and Cortez and Fly both tag in teammates as a result.

Bael from The Crew then faces Argenis, a luchador to look out for after he impressed greatly in the four-way match during his last appearance in LU. Bael uses his no-nonsense thug style to pound Argenis but the luchador fights back, getting a close call after a belly to back Suplex.

Aerostar enters the fray, upping the pace with a wonderfully executed tilt o whirl off the ropes – he has a brilliant sense of timing and fluidity in the ring and his experience really shows.

Argenis and Aerostar then team up in a move which needs to be seen to be believed as Aerostar stands on the shoulders of Argenis on the ropes getting a huge dive onto Bael, in a hugely impressive manoeuvre that only manages a two count, along with a raucous round of applause from the audience.

The Crew single out Aerostar and, after a kick to the back of the head, the team set up an excellent flourish of dropkicks, taking out the luchas in the process.

The team of the Crew work together much better than the luchadors, allowing them to take control of the match – the amount these guys know each other allows them to single out Aerostar and, although their tactics may not be morally sound, they are effective (at one point Castro actually bites Aerostar, for example).

Aerostar manages to stage a comeback with a backwards elbow from the top rope, yet struggles to make the tag to his partners, finally grabbing Argenis just as Mr Cisco is set to attack him.

Argenis once again ups the ante, using the ring to his advantage in true lucha style, hitting a close call with a Sunset Flip Powerbomb. The Crew try out a team variation of the Coup De Grace Footstomp, which has a fluid move set and build up.

Aerostar takes out Cisco and everybody else with a hurricanrana out of the ring from the top rope, in a beautiful move This style of match allows LU to use a lot of their talent and the fact they allow these matches the room to breathe helps get them over as well as they do – this is fast becoming unmissable television.

Aerostar wasn’t finished there though, as he once again runs the ropes and dives over the top to attack everyone including his teammates once again. These high spots work immensely well in this federation and don’t feel force, as the talent seamlessly integrate numerous wrestling styles in every match.

The Crew get the momentum and wrap up proceedings with their modified Codebreaker/3D combo move.

After last week’s interview with Cage, Vampiro takes the hot seat with Prince Puma and his coach Konnan.

Konnan does most of the talking here, explaining Puma’s road to the belt. Vampiro is much more subdued than the last interview for the most part and this works a lot better, as he focuses this time on the story and not instead getting himself over and it is a hundred times more effective.

Nearer the end he chirps up, this time about Konnan cutting him off but the point has been made. The run-in with Konnan teases a return to the ring, which Vampiro is itching for if these interviews are anything to go by. 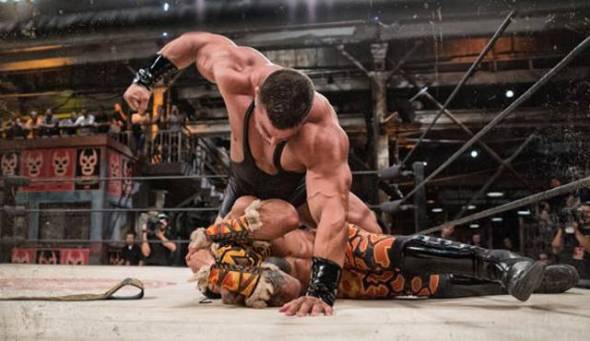 The impact Cage has been making in a few short weeks has been impressive, but this behemoth of a man still has a challenge to overcome in Puma.

As he makes his way to the ring, he is assulted from behind by the champion – Puma is pissed and rightfully so, considering the last encounter favoured Cage.

Once things get to the ring, Puma tries to use his speed against Cage, but he shrugs off an attack by quite literally stopping Puma in his tracks.

Cage dominates for most the match, catching Puma and launching a devastating sit-down Alabama slam. Puma fights back, hitting a swinging DDT as both men crawl to their feet.

The smash-mouth style of Cage and his sheer size make this an interesting battle and it has been sold well by both luchas – this adds to the believability and Cage has no problem selling for Puma either, which will further enhance his Machine persona instead of going down the Superman route à la John Cena.

Double knees from Puma manage to take the big guy down, gaining a close two count, but Cage fights back, catching a dive into a Jackhammer – his strength is immense and this feat only further exemplifies it.

Puma pushes off Cage, hitting a stiff high Knee, but he proves he can hang with the luchadors, by performing a moonsault from the top rope. Cage comes across a little like Brock Lesnar era 2002, thanks to strong style wrestling and an imposing figure to boot.

Cage manhandles Puma, but the champion valiantly fights back with a succession of kicks to the mid section, before The Machine Powerbombs Puma into oblivion. And, when he tries for a second time, the champion rolls out taking a brief advantage in the match.

Puma hits a huge Northen Lights Suplex, keeping a firm grip while attempting to gain a sequence with another Suplex, hoisting the big guy and holding him up in the air for a second or two before impact, showing Puma can match the strength of Cage when needs be.

Cage pushes the referee to knock Puma from the top rope when he goes for his 630 Splash – smart ring awareness from The Machine – but surprisingly the ref lets it slide, allowing the match to continue.

Sadly things don’t progress much further as frustration gets the better of Cage and he gets disqualified after a low blow.

I was reluctant in the swift push of Cage, but the more in-ring action he delivers, the more I’m convinced. The action doesn’t end there though, as Cage continues to attack Puma with an innovative Gory stretch modified into a slam.

Cage then pushes the ref into the ropes, taking him out, as Konnan smashes the monster on the back with his cane, which Cage shrugs off, and smashing him in the face with the title belt.

Taking the Lucha Underground title in his hands, Cage, in a strongman style feat, tears the belt in two in front of the audience, throwing the shards on the ground as Konnan writhes in a pool of blood.

An excellent way to keep the push of Cage going while allowing Puma to retain and simultaneously giving the story-lines room to progress further.

Lucha Underground is broadcast on Wednesdays on the El Rey Network