After stealing the show at NXT Takeover [R]Evolution, all eyes were on the impressive roster once again at Takeover Rival. Although some fans thought that it would be hard to equal or surpass that night, which will go down in PPV history for shaking up not only the talent on NXT but even the main WWE roster, those of us watching the show religiously knew better. They wouldn’t let us down.

Rival had a lot to live up to, but with a Main Event with a near perfect build in Kevin Owens Vs Sami Zayn – friends turned to bitter enemies is somewhat a wrestling cliché but it was played with such heart and passion it was hard not to get emotionally invested in this feud – it seemed destined to at least end on a high note, much like its predecessor. 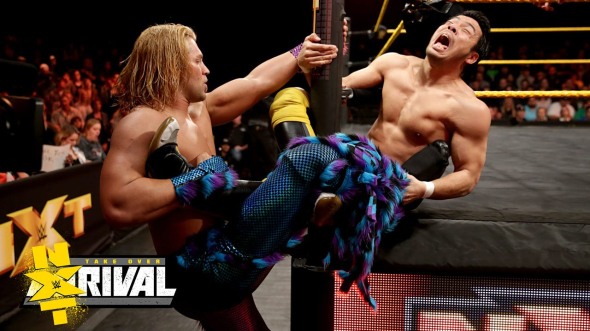 Breeze debuted a hilarious new accessory (a Selfie Stick) as he entered the ring and, as came down the ramp, a fan jumped the barricade and embraced Prince Pretty. However, it turned out that she was a new NXT recruit and this fit in perfectly with Breeze and his Dolph Ziggler/Zoolander persona.

Itami is finally settling down in NXT and, as each week passes, the fans are seeing more of his personality and style. Tyler Breeze is another impressive talent who is undoubtedly set for the main roster soon, and this match was an excellent opener to the show and could’ve easily been higher on the card.

This hard-fought bout set the tone perfectly for what’s to come and once again fans were in for something special. Breeze used the ring to evade Itami’s trademark kicks and this back and forward battle ended with a huge running dropkick from Itami. 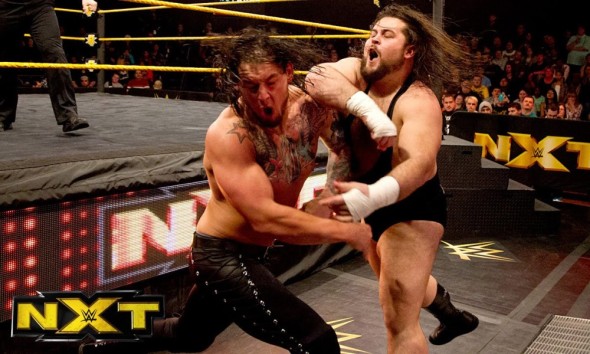 This feud has been fun to watch, and with Baron Corbin being near indestructible in NXT thus far, this was an out-and-out brawl – nothing pretty here just a good ol’ fashioned slugfest.

Not the best encounter the two have had but my no means the last, and Breeze/Itami was a hard act to follow, too. Dempsey is growing in leaps and bounds and Corbin has a presence about him, which makes his gimmick work – he could go far in the WWE. I could see him feuding with Rusev on the main roster. 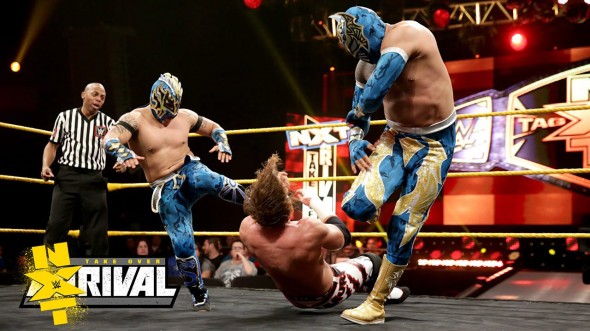 Mixed reactions on this match and sadly what could’ve been an epic, high-flying encounter with a fast pace kinda falls flat on its face. Mistakes are bound to happen with the speed of the action and as with any wrestling match the competitors have to gel.

The Vaudevillains and the Dragons have proved this fact over the past few weeks, but it hasn’t been so easy for Blake and Murphy. The mega push they’ve received has given them a massive opportunity here, and although they are working well together as a team and have flashes of brilliance such as the finish of this match (Blake hits an impressive Frog Splash to take the win), the chemistry isn’t quite there yet.

This was the worst match on the card and that is no means derogatory as it was still an entertaining, although flawed, encounter. Put The Vaudevillains and Itami/Balor against Blake and Murphy, let them stack some wins on the title reign, and allow them time to breathe and they could go far.

From Balor’s reliably enigmatic entrance, to the wonderfully executed finish, this match had everything but the chemistry between the two was particularly outstanding – the early stages saw them countering and negating each other’s moves in perfectly fluid transitions, which had fans on the edge of their seats.

Both these Superstars will be WWE champions in the future and, judging by this match, that future is bright. Both men fought a great back and forth battle – when Neville gained an advantage the sheer determination of Balor shone through, adding massive credibility to the man that gravity forgot.

When it looked as though Neville was set to finish off Balor with the Red Arrow, the Irishman countered in an innovative way by pushing Neville into the turnbuckle, opening up the coup de grâce footstomp to take the win. 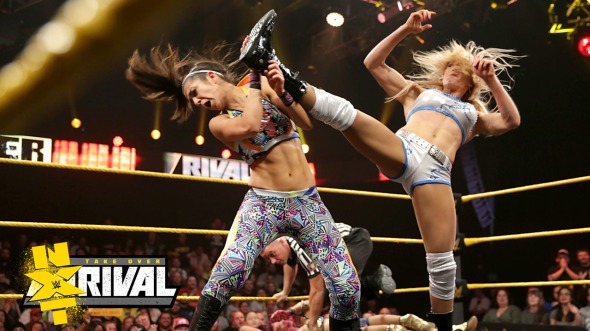 The odds were firmly stacked against the fighting women’s champion in this bout. From the get-go this was a hard-hitting, exciting match – hopefully every single one of the WWE Divas was watching these incredible wrestlers in action, as these four ladies really showed how it’s done.

Bayley looked as though she was going to steal the win with some huge Bayley To Back Suplexes from the top ropes, her energy and passion flowing through the encounter. She is definitely set for big things in NXT.

Elsewhere, Becky Lynch and Sasha Banks worked to take out Charlotte Flair and, as they worked together as a team, it was evident that the Boss had her eyes firmly on the title.

Charlotte fought valiantly on all sides and, after another Bayley To Back Suplex left the champion downed, Bayley looked set to take the belt, leading the Boss to knock her clean out of the ring so she could apply a crossface to dethrone Flair and become the new Divas champion.

Excellent match and one of the highlights of the night. Each of these wrestlers deserve all the accolades they have received, Sasha Banks in particular

All eyes were on this one and rightfully so, as it was an emotionally-charged, well-built and energetic bout. Zayn has been showcasing a more ruthless and driven persona in his hunt to get retribution on Owens and he was truly on fire tonight.

Owens, on the other hand, has been a monster since his unforgettable début at Takeover [R]Evolution and he straight up murdered Zayn in this bout – everything he threw at him, he just kept coming back, systematically breaking down his ex-BFF until he could fight no more.

The referee stopped the bout when Zayn was looking dazed and battered. This kept the heat on Owens, making him look unstoppable while protecting Sami Zayn in the process and still keeping him over.

Excellent booking with the finish, having fans gasping at the sheer destruction on display. This won’t be the end of this feud and  the match left fans salivating.

A hard task to follow the outstanding Takeover [R]Evolution, which had all eyes on NXT, but Rival proved that it was no fluke. This seeder federation to the big leagues keeps piling the pressure on the main roster by delivering top class wrestling week in week out and now they’re killing it with Special Events (basically PPVs) too.

The future of WWE is bright in the capable hands of Triple H and, thanks to a diverse and talented roster, great story-lines, well-executed matches and involving feuds, NXT is already essential viewing for 2015 and beyond.

Catch NXT every Wednesday on the WWE Network