The first PPV of the year is usually a highly anticipated, reliably fun event but, sadly, this year a stipulation hangs solemnly over its head; Roman Reigns will have to defend his title in the 30-man Royal Rumble match.

This takes the surprise element out of the victor gaining a spot in the Wrestlemania title match and kicking off ‘Mania season in the process.

Given the mega push Reigns is receiving it is hugely doubtful he will actually lose the belt in the match.

Let’s take a look at what else is to come tonight:

Fatal Four-way Tag Team Match for two spots in the Royal Rumble: Darren Young & Damien Sandow vs. The Dudley Boyz vs. The Ascension vs. Mark Henry and Jack Swagger
A fatal four-way to determine two spots in the Rumble match is really just a pay day for teams and wrestlers that people, for the most part, don’t care about.

That being said it would be cool to see The Ascension finally get a shot at something other than jobbing to every man and his dog on the roster. Pulling double duty even on the pre-show will mean this should be a short affair with The Dudley Boyz winning a shot at the WWE title in the Rumble match.

30-man Royal Rumble Match for the WWE World Heavyweight Championship: Roman Reigns vs. Everyone
The Rumble match itself is a fun concept and usually pulls out some decent guest spots and cameos from the WWE vaults.

The aforementioned stipulation looms large over this match particularly with Reigns entering at #1.

The 29 other Superstars include AJ Styles and Tough Enough winner Josh(?!) if rumours are to be believed.

Other than the cameos and the inevitable Kofi Kingston acrobatic display, which could be escalated ten fold with the New Day involved, ultimately this will be the Roman Reigns show and its hard to look past him overcoming the odds and defending the title despite The Authority‘s best efforts.

Last Man Standing match for the WWE Intercontinental Championship: Dean Ambrose (c) vs. Kevin Owens
This match right here will steal the show and could be the highlight of the evening, too.

Last Man Standing suits these two to a tee; they will throw everything and the kitchen sink at each other in a brutal and hard-fought bout.

Dean Ambrose can work with anyone but Kevin Owens isn’t just anyone, he is something very special and coupled with the enigmatic Ambrose hopefully this isn’t the end of this feud. 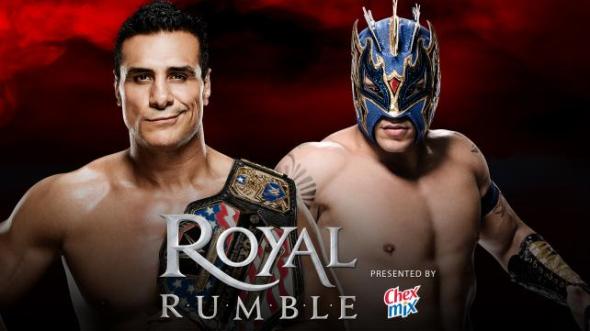 United States Championship: Alberto Del Rio (c) vs. Kalisto
The fact that this belt is swapping hands on Smackdown shows how credible the title actually is.

After Kalisto won it on RAW only to drop it on the same week’s Smackdown show is also a reflection on how WWE sees Kalisto.

Alberto Del Rio is fitting in well with the League of Nations and is suited to working in a stable rather than on his own.

This title is just an accessory that could be better utilised elsewhere.

I feel they are really dropping the ball on this one and Kalisto could fill a gap in the roster as he offers an innovative offence and a spectacle.

Kalisto to regain the US title (again)

Divas Championship Match: Charlotte (c) vs. Becky Lynch
Given the time, this could be a real show stealer; both women are seriously talented and the feud could use a spark of ignition.

Charlotte is adapting to her heel persona nicely and the Ric Flair involvement is used as enhancement for the women, not to get Ric over, which is how it should be.

Becky Lynch winning the title would push this to a whole new level and allow Charlotte to ramp up the heel persona and keep the focus on this feud.

Tag Team Championship Match: The New Day (c) vs. The Usos
New! Day! Rocks! This tag team has been consistently wonderful, with their scathing city-baiting and excellent comedic timing this will bring spirits back up so don’t you dare be sour!

The Usos on the other hand are getting a little bit stale and hopefully this is all about The New Day and they retain the titles.