The final stop on the road to NXT Takeover: Dallas gives one final push to the stacked PPV, which sees many of the competitors in full-on action before they set out to steal ‘Mania weekend for the second year in a row. 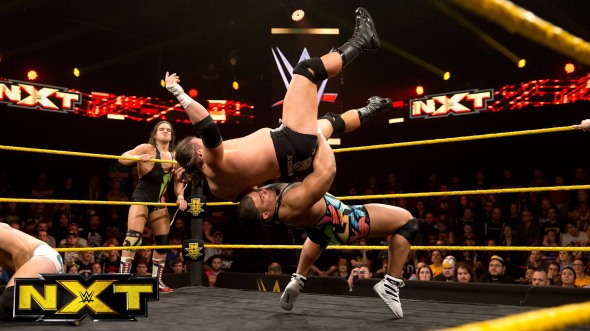 Quick tag action kicks off the show, with the challengers to the NXT titles, American Alpha, showcasing their talents against a couple of local competitors. The crowd are firmly behind Jordan and Gable as they do an excellent, seemingly effortless job controlling the ring throughout.

Jason Jordan hits an impressively high dropkick, as they control the pace, tagging fluidly and keeping the fans engaged. Not to be outdone, Chad Gable hits a succession of beautiful Suplexes to rival his tag partner’s impressive spots.

They wrap the swift match up with a bridge pin, once again showcasing this talented duo’s insane powers as a team – it’s also worth noting how easily they would slip into the main roster, if given the chance.

American Alpha win the final stop on the road to Dallas

An exclusive interview with Finn Balor airs next doing well to add to the anticipation of this match.

The Lone Wolf of NXT sets out to make an example of a local wrestler who, allegedly, stood in his way as a message to his Takeover rival Austin Aries.

The crowd are audibly against Corbin, particularly his swift work of this wrestler as a statement to Aries, and it won’t be as easy come Dallas where he faces his greatest challenge yet at NXT.

Corbin ins with a Deep Six and follows the destruction up with an End of Days, adding an exclamation mark to his statement that the fans do not appreciate

The Revival Vs Tucker Knight and Steve Cutler

The tag team champs take to the ring to show American Alpha the job won’t be easy at Takeover. The tag team division is tremendous in NXT and these two are at the height of the division.

Scott Dawson and Dash Wilder work an old-school, territory style and gel perfectly together, bringing a huge aggressive streak and impact-ful double team manoeuvres. This was really just a showcase match, and a teaser, for the title bout at Takeover but that didn’t make it any less fun.

The Revival win with the Shatter Machine, a Codebreaker variation.

The journey was brilliant, with the champs systematically destroying their opponents

Alex Riley comes out on fire, taking the fight to Crews from the outset. Crews, kin turn, does well to take the punishment and use his agility and athleticism to shift the momentum in this fast-paced bout.

When Crews does get the shift, it is hard for Riley to absorb the assault, and the big guy gets a huge dropkick and powerbomb, nailing a quick victory at the cost of the returning Alex Riley.

The celebrations are minimal, however, as The Drifter Elias Sampson enters the arena, strumming his guitar and methodically staring down Crews as he sings a haunting tune. Sampson refuses to fight Crews, manipulating the situation while simultaneously adding countless amounts of intrigue to their upcoming bout.

A great, pre-recorded VT hyping the Bayley vs Asuka match airs immediately after this match. The editing team at WWE are truly to be commended on this package as it does a great job of adding anticipation to an already super-hyped bout. 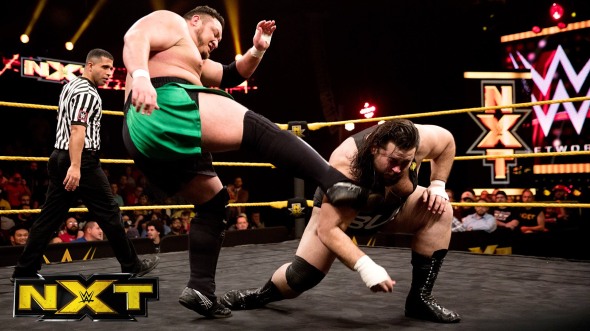 After Samoa Joe made a significant statement by choking out Dempsey last week on NXT, in a message to Finn Balor, BullFit once again gets thrown into danger as the Samoan Submission Machine wants to drill his message to Balor home.

Bull Dempsey comes out wanting revenge, looking focused as he storms to the ring. Once again, it has to be said that it was a real shame he was dropped from NXT. Joe is furious and is using this aggression to control the match and release the anguish he has towards the NXT champion.

The two behemoths slug it out, trading blows for a bit, but it doesn’t take long for Samoa Joe to gain the upper hand and when he does it all goes quickly downhill for Dempsey.

Joe quickly applies the Coquina Clutch and, as Dempsey helplessly taps, the Samoan Submission Machine refuses to release the hold.

GM William Regal rushes to ringside, yet still Joe refuses to relinquish the submission. This forces Finn Balor to come to the aid of Dempsey and the fight that breaks out between he and Joe is furious.

Both men are relentless as it spills outside the ring and through the barricades. Joe throws Balor into Corey Graves, which leaves the announcer in a crumpled heap on the floor as the carnage continues.

NXT security and staff try to break up the collision, but it proves ultimately unsuccessful as the fight continues, closing the go-home show in riotous fashion – and making this week’s RAW look even more paltry in comparison.

The score will be settled in Dallas in a Main Event, which will set the bar for Wrestlemania and have the NXT Universe clamouring for more.

Catch NXT every Wednesday on the WWE Network