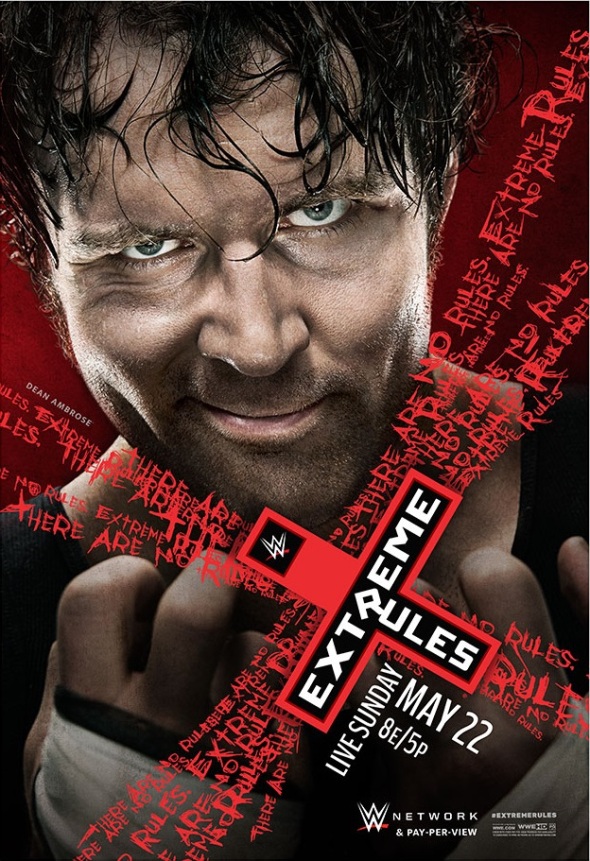 Those of us who weren’t expecting much going into this year’s Extreme Rules (AKA Payback: Part 2) won’t have been too blown away by the night’s festivities. There was one stand-out match that will likely still be talked about in years to come, but otherwise it rattled along at the usual weird pace, an episode of RAW gussied up with unconvincing bells and whistles that ended predictably before a last-minute shock sent us off into the night thinking what we’d just witnessed was a great deal better than it actually was. The logic goes that; if it ends on a high, we’ll think it’s great. If it ends with a thud, we’ll take to Twitter to decry it for being the worst show ever.

As it stands, Extreme Rules 2016 was kind of a bit of both. And also neither.

Things start off in the usual way, with the nonsense Kick-off show during which there were a couple of cool moments, one which sees Big Cass setting up a feud with The Dudley Boyz and another involving Rusev, Lana and the ill-advised social media lounge (when asked if he wishes to answer Tweets from fans, the Bulgarian flatly answers “No”, echoing our collective sentiments). The Miz also delivers a monologue from a 2004 movie starring the great Kurt Russell. Otherwise, it’s the usual rubbish culminating in Baron Corbin winning his match against Dolph Ziggler, to little fanfare.

The show kicks off proper with the tornado tag pitching DA CLUUUUUUUB against The Usos. Happily, particularly for a match of this nature, the fighting starts before Gallows and Anderson even make it to the ring and never once slowing down over its relatively short time slot (a running theme tonight, in a PPV which is 80% advertisements, 20% wrestling). It’s nothing life-changing, but the NJPW recruits look great, as per, and it’s always fun to watch The Usos having their asses handed to them by superior performers – especially when it results in a devastating loss for them.

Up next, Kalisto takes on Rusev to defend his US title in a rather brutal encounter that sees the Lucha star stuck in an excruciating bear hug for the first ten minutes of the match. He eventually powers out, only to get a swift knee to the spine from his much larger opponent. It looks as though Rusev is in for a DQ but, seizing the opportunity while simultaneously ignoring the advice of the referee, he locks in the Accolade to steal the win, and the title, in a perfect display of super-smart heel tactics that leaves Kalisto, and the fans, reeling.

The tag championship match follows, with the incomparable New Day taking charge with a rousing promo – Xavier Woods demands nudes, Big E argues that that wasn’t a time machine they used last week, Kofi is adamant it was, their opponents, The Vaudevillains are represented by garden hoes, etc. – to start the match off proper. What follows is, again, shorter than we’d like but nonetheless exciting, fun, fast-paced and consistently involving. The New Day, naturally, retain, but it’s a hard-fought victory that suggests their title reign still has a lot of life left in it.

It wasn’t too long ago that the intercontinental title seemed like the least respected belt in the WWE. But tonight, the fatal fourway for that very belt put it right back in pole position thanks to some fine work from Cesaro, Sami Zayn, Kevin Owens and even current holder The Miz. Extreme Rules may have been a (mostly) unmemorable affair, but this particular match made the whole damn three hours worth watching. It’s a near-perfect example of everything that’s great about pro-wrestling, from the storytelling to the spots to the unpredictability.

The bell has barely rung and Zayn has blasted Owens with a massive boot to the face, knocking him out before he’s even had a chance to land a blow. What follows is an insane battle of wits as all four men fight to stop the others nabbing the belt, dragging each other out mid-pin, landing death-defying spots – Zayn’s Canadian Destroyer to Cesaro is one of the coolest moments of the year thus far, while an always-welcome Tower Of Death hits hard and Cesaro‘s Belly 2 Belly into an exploder Suplex is neck-breakingly gnarly – and coming back harder and harder each time they’re seemingly knocked out of the running.

In a couple of thrillingly well-choreographed sequences that cleverly mirror each other, Cesaro strands the other three in the corners and takes turns darting back and forth, whacking each man with a jaw-breaking uppercut, before Owens takes his place, swapping his digs for super-smooth cannonballs. The fans are crazy hot throughout, and rightly so – it really feels like it could be anyone’s game. A “Fight forever” chant is well-earned, and extra-special outside of NXT, which is perhaps an easier setting in which to sell this kind of match. The end is pleasingly logical, and satisfying also, as ex-buddies Zayn and Owens duke it out ringside, while, unbeknownst to them, Miz pins an exhausted Cesaro to seal the deal and retain the title for another night.

Naturally, it was always going to be difficult to follow up that massive high but regardless the so-called Asylum Match, named because of Ambrose and his presumed lunacy, is a gimmicky slog that kind of comes into its own towards the end thanks to some strategically-placed thumb-tacks. It starts off well enough, the fans trying their best to get behind it mostly thanks to goodwill earned by two talented participants, but quickly devolves into a prop-swapping exercise – a mop here, a Kendo stick there, a straitjacket that’s never properly worn by either of them – before Ambrose lands an elbow drop off the top of the cage.

A “We want Rollins” chant echoes around the arena, which either means the crowd is bored or they’re confused about which ex-Shield member that dude is actually mad at (clue: his name rhymes with Shmoman Shmeigns). Either way, the high-flying spot doesn’t hit quite as hard as perhaps it should, and it’s not until Ambrose dumps out a bag of thumb-tacks that things really liven up. They tease it for ages, of course, Jericho even managing to lock Ambrose into The Walls at one point. Naturally, it’s not the man after whom the match is titled who is launched backwards into the ‘tacks and a follow-up Dirty Deeds seals it for Ambrose, confirming the theory that whoever is lucky enough to have his face plastered on the poster for Extreme Rules will subsequently win on the night.

With two matches, and a little over an hour to go, the pace suddenly picks up as the show hurtles towards its inevitable conclusion. The women’s match sees Charlotte take on Natalya, ostensibly without the help of her father. It’s a vicious, rough bout with an emphasis on hand to hand combat and very few spots to coo over. Nattie locks in a Mexican surfboard, and soon after Charlotte lands a Figure-4 while she screams “Noooo!” just to make her position clear in case of another bullshit finish like last time. Nattie also manages to trap her opponent in a Sharpshooter, dragging Charlotte back into the ring even after she’s made it to the ropes to break the hold.

But it all falls apart as new recruit Dana Brooke shows up in Ric Flair drag to distract Nattie long enough for Charlotte to steal the win and retain. Not only is there zero reaction to Brooke’s entrance, but there’s no discernible noise when Flair retains either. It may be a case of shock rendering the assembled fans slightly quieter than usual, or maybe they’re disappointed nobody won or lost clean. But, if we’re to treat the women as equally as the men, then it stands to reason that a dirty heel like Charlotte will use whatever means to win as she can. And, if nothing else, we can take it from Brooke’s sudden inclusion in this feud that perhaps some of the other ladies (hi, Becky) should be along shortly to fight Nattie’s corner.

And so we finally arrive at the Main Event, an Extreme Rules-themed match that sees current golden boy, and sure-fire winner, Roman Reigns take on AJ Styles for the title. Again. Now, presumably you’ve already watched the show, so you know what happens, but let’s pretend for a sec that that man doesn’t return to make all of our dreams come true and everything right in the world again, and first judge this match for exactly what it was: a load of rubbish. I know there is a very vocal section of fans, particularly on Twitter, who think that most people hate Reigns for the sake of it. My question is, on the strength of this match alone, with an arena-strong crowd chanting “You still suck” even after he’s hit a Razor’s Edge into a powerbomb, a match which sees him kick out of about a million Styles Clashes for no discernible reason, how could you not hate him?

This is a match that sees Styles, a far superior performer in every conceivable way, fight off Reigns and his walking jock strap cousins with a chair, and he still doesn’t win. It’s a match that sees his enthusiasm and energy never falter while Reigns pants and wheezes like an old donkey, flopping around the ring, and he still doesn’t win. It’s a match that, after twenty minutes of Styles giving it his absolute all, carrying his opponent as he slips and slides and botches and kicks out of every goddamn pin attempt, sees him leap off the top rope into a fucking Spear to lose and you still can’t see why people hate Reigns? You’re still going to argue that it’s just mob mentality, or dumb wrestling fans never being happy no matter what happens?

We shouldn’t accept whatever bullshit we’re given just because we’re told to. We should be free to complain when things don’t make sense, when quality falls short, when performers do not perform to the standard we deserve as paying customers. Tonight’s Main Event is everything that’s wrong with the current state of the WWE. It’s why talented wrestlers like Barrett and Cody Rhodes are legging it elsewhere, to go where they might get a proper shot instead of jobbing for months while Reigns gets a push he doesn’t deserve.

And yet, it’s why Seth Rollins‘ return, as inevitable as it was in the age of social media, hit us all so bloody hard. Seeing him come back, hit that Samoan sack of spuds with a Pedigree before confidently, and triumphantly, raising the world heavyweight championship above his head – a title he deserves, no less – gave us renewed hope that all is not lost, that maybe, just maybe, there is a greater plan at play. We may be cynical about Reigns, but we still believe. Even if it’s only a little bit.